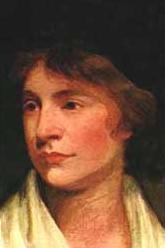 “In tracing the causes that have degraded woman, I have confined my observations to such as universally act upon the morals and manners of the whole sex, and to me it appears clear, that they all spring from want of understanding. Whether this arises from a physical or accidental weakness of faculties, time alone can determine; for I shall not lay any great stress upon the example of a few women who, from having received a masculine education, have acquired courage and resolution; I only contend that the men who have been placed in similar situations have acquired a similar character.”
Vindication of the Rights of Woman, 1792.

A Brief Sketch Of The Life Of Mary Wollstonecraft..

Vindication of the Rights of Woman, 1792