History of the French Revolution 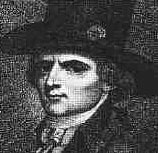 The conspiracy of equality organised by Babeuf and his followers aimed at provoking an armed uprising of the plebeian masses against the bourgeois regime of the Directory and establishing a revolutionary dictatorship as a transitional stage to “pure democracy” and “egalitarian communism.” The conspiracy was disclosed in May 1796. At the end of May 1797 its leaders were executed.

Letter to Dubois de Fosseux, 1787
Letter to “l’Observateur”, 1789
The New Calendar of the French Republic, 1793
They Want to Save Carrier; They Want to Put the Revolutionary Tribunal on Trial. People beware!, 1794
Prospectus for Le Tribun du Peuple, 1795
Song of the Equals, Lyrics by Germain, 1796
Creation of an Insurrectionary Directory, 1796
Fragment of a Projected Economic Decree, 1796
Manifesto of the Equals, 1796
Fragment of a Projected Speech to the Victorious People, 1796
Analysis of the Doctrine of Babeuf, 1797
Babeuf’s Defense (From the Trial at Vendôme, February-May 1797)
Babeuf’s last letter to his family before his execution, 1797

Babeuf and the Conspiracy of the Equals, E. Belfort Bax, 1911